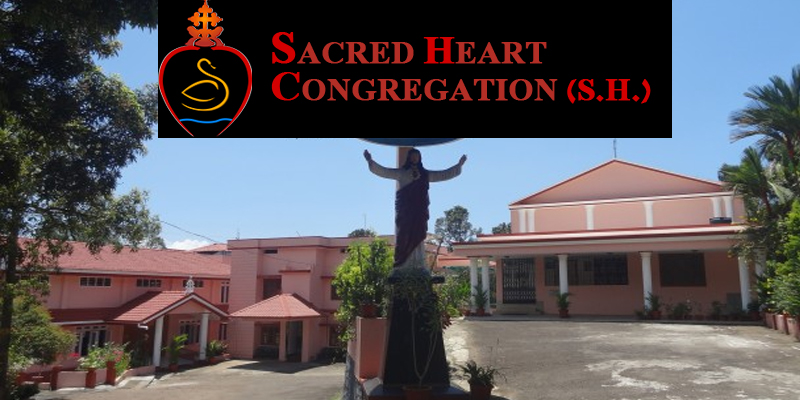 The Sacred Heart Congregation (SH) is a religious institute for women founded by Venerable Fr. Mathew Kadalikkattil (1872-1935) on 1st January 1911 in Pala, Kerala. The members of the Congregation are to live radically the discipleship of Christ, experiencing deeply the compassionate love of God the Father manifested through the Sacred Heart of Jesus, and sharing it with others especially the poor and the afflicted. Rev. Fr. Mathew was born on 25th April 1872 at Edappady in the Diocese of Pala, was a fervent devotee of the Sacred Heart of Jesus and was a man of compassionate heart whose love for God found expression in the concern for the poor and the forlorn. While serving as a parish priest he considered himself as a 'Servant of the Sacred Heart' and promoted devotion to the Sacred Heart of Jesus not only through his words but also by his exemplary life of charity. It was during the long hours spent before the Blessed Sacrament he received the divine inspiration to found a new religious congregation for women in Syro- Malabar Church. His intention was to spread the devotion to the Sacred Heart of Jesus and also to care for the destitute and the orphans of the society in whom the face of the forsaken Jesus is reflected.

In 2021 the Sacred Heart Sisters are rendering their services in 20 States in India and 5 countries abroad. There are 3550 Sisters in 443 houses in India and 47 houses abroad. The Congregation has eleven provinces and one region. The Congregation believes that it is the mission of the Sacred Heart Sisters to engage in dispelling the darkness of ignorance by imparting quality education, social upliftment through animation, concretization and welfare activities, caring the abandoned children, evangelization and upliftment of Christian communities in Syro-Malabar, Latin and Malankara dioceses.

(Vicar General, Councillor for Proclamation of the Gospel)