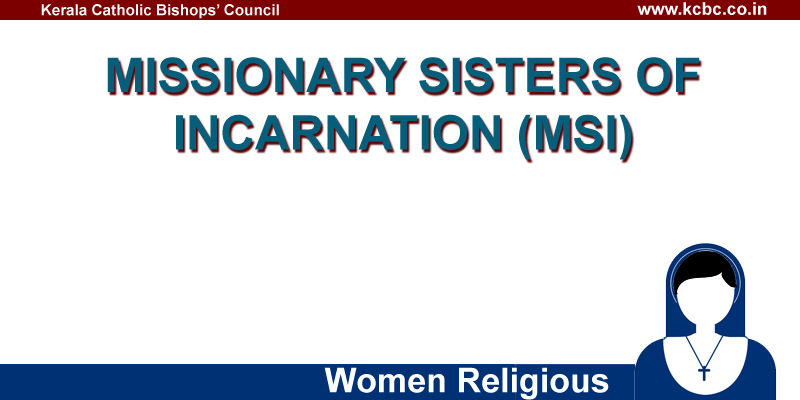 The Foundress Mother Carla Borgheri had been intensely inspired by the mystery of the Incarnation. After eager anticipation and long contemplation, she was blessed with the divine inspiration to spread the word of God into the hearts of the people the world over. Thus with the help of Bishop Luigi Liverzane, she started a small Community with just three members under the banner, Missionaries of the Incarnation.

"Unification of souls dedicated to the following of Christ in a life nurtured by charitable and apostolic work" is their motto. They aim at carrying out and recognising more profoundly, the mystery of Christ. Hence, they adhere to the purpose of the incarnation - adoring the Divine Trinity incessantly and meekly.

Mother Carla Borgheri ever cherished the longing to lead a simple life. She was never touched by the attractive but hollow vanities of the European social atmosphere. Ever seeking the will of God, she turned her house into a Convent but preferred the abode to be called a house and not a convent.

The small Community thus started in Italy in the year 1961, began its Apostolic work in Frascati. Slowly and steadily it began to grow and spread its canopy and then branched out of Italy. With the invitation of His Excellency Rt. Rev. Alexander Edezhath, the Congregation reached the Diocese of Cochin in 1976.

On arrival they were accommodated at the Creche near the Bishop's House and they remained there until the construction of their House was completed. His Excellency Rt. Rev. Dr. Joseph Kureethara inaugurated the House at Nazareth, Cochin, in 1977. Now they have 16 branches and recently they have extended their services to the continent of Africa as well. From the very inception of the Congregation Rev. Mother Carla Borgheri has been their Superior General and Rev. Sr. Anna Piu, the Assistant General.

Rev. Fr Joseph Kureethara, prior to becoming Bishop, was the cleric most sought after by the Italian Congregations. His whole-hearted help and unstinted support enabled them to incorporate many Indian aspirants into their Communities. Thus in due course he became instrumental in the opening of their Houses in India. The Congregation of the Missionary Sisters of the Incarnation is one of the many such that found its route to the sub-continent thus.

In the case of the Community this role of the bishop as the insrument of introduction to our country can be traced to the time just before the seventies. Rev. Dr. Joseph Kureethara was then Rector and teaching at the Mt. Carmel Petit Seminary, Fort Cochin. His Eminence, Giuseppe Cardinal Caprio, the Pronuncio to India ( later, Segretario dell Patrimonio della Sede Apostolica ), introduced Rev. Mother Carla Borghery, to the Rector. Msgr. Orlandi, from "Sacra Congregazione per la Disiplina della Fede" also did the same. Subsequently, Mother Carla sent a letter to the Rector asking the Rev. Father to find vocations for her Congregation. Bishop Alexander Edezhath gave his permission to the Rev. Father to extend help to the Community.

Rev. Dr. Kureethara contacted a few parish priests and as a result could find six candidates. There were some hopefuls to join the Cottolengo Community as well. The Rev. Father conducted classes for them at the Mount Carmel Petit Seminary. Subsequently, in April 1970 the Rector left Cochin with the candidates and reached Rome. They were taken to the Cottolengo House near St. Peter's Basilica, where he celebrated Holy Mass. After getting Papal blessing at Piazza San Pietro, the six girls started their novitiate on 25th March 1971 and made their first profession on the same date exactly an year later.

After their profession, the six new Sisters returned to Cochin on holidays in December 1974, accompanied by Mother Carla. The Rev. Mother had a letter from the Bishop of Frascati, Mons. Luigi Liverzani. The missive contained the message that the Sisters were planning to start their first House in India in the Diocese of Cochin. On January 7, 1975, Mother Carla Borgheri presented their formal request to Bishop Alexander Edezhath for permission to institute their convent in the Diocese. His Excellency granted sanction and appointed Rev. Dr. Joseph Kureethara as the Director of Missionaries of the Incarnation.

In the mean time Bishop Edezhath had retired, handing over the Crosier of the Diocese to the former Rector. Thus on the Feast of St Joseph, 1976, the foundation stone for the maiden institute of the Congregation in India was laid at Nazareth by His Excellency Rev. Dr. Joseph Kureethara, the New Bishop of Cochin. Construction work for the Convent building started and Madre Carla reached India again in September that year. The Mother General stayed at St. Mary's convent, Fort Cochin, briefly and then shifted to the old Canossian Creche, west of the Bishop's House.

The construction work having come to completion, the edifice at last was ready. The convent building was solemnly blessed and the St. Joseph's Convent, Nazareth, of the Missionary Sisters of the Incarnation was inaugurated on May 7, 1977. Subsequently, in December 1978 they started a Ladies' Hostel and later in February 1980, began novitiate there.

Within a short span of a decade, the Congregation branched out into other dioceses as well. H.E. Dr. Marianus Arokiasamy, Bishop of the Diocese of Kottar, invited the Sisters to open a House in his diocese with which they complied. Thus the St. Charles' Home was set up in Nagarcoil and was inaugurated in March, 1982. Likewise, at the request of H.E. Dr. Mariadas, Bishop of the Diocese of Vizak, another Convent was establihed at Paykaropetta in 1985 but had to be closed two years later.

H.E., Rt. Rev. Dr. Cornelius Elanjickal invited the Sisters to his Vijayapuram Diocese and a House at Kumarakam was instituted in February 1988. Later on, as Archbishop of Verapoly, His Grace Cornelius Elenjickal inaugurated two Convents of the Missionary Sisters of the Incarnation in the Archdiocese of Verapoly, one at Vallaarpadam island in February 1988 and another at Thaikoodam in February 1989. So also another Convent was erected at Samayanellur in the Archdiocese of Madura in May 1990 at the request of the Archbishop, His Grace Marianus Arokyasamy.

Yet another House, specifically for the purpose of the formation of candidates, was inaugurated by His Grace, Rt.Rev. Dr. Cornelius Elanjikal, Archbishop of Verapoly, at Kalamassery, on 18th February, 1993. The Diocese of Kottar was celebrating the 450th year of the arrival of St. Francis Xavier in India. To mark the jubilant occasion, H. E. Leon. A. Thamaraj, Bishop of Kottar, invited them to start a perpetual adoration convent at St. Francis Xavier's Cathedral. The Congregation complied with the request and thus their Adoration Community was set up and inaugurated there on May Day in 1994. In the following year H.E. Rt. Rev. Dr. Peter Remigius, Bishop of Kumbakonam, invited them to his Diocese. The Bishop had the aspiration to start a school for the hearing impaired which, with the help of the Community, could be realised when the school was inaugurated on 22nd February 1995.

The tender sapling of the Congregation of the Missionary Sisters of Incarnation thus planted in the Indian soil in the Diocese of Cochin in 1977, grew up into a healthy, solid tree spreading its cool shade to ever so many distressed and suffering from the cradle to the grave. They render services through various apostolic activities ranging from parochial pastoral work, house and hospital visits to marriage and family counselling. They undertake activities for the welfare of infants, youth and the aged. They run schools for the hearing-impaired and for the poor and penniless. The St. Joseph's Convent runs commercial institutes, working women's hostel, tailoring classes, Kindergarten and Day-care centre. In short, wherever they are settled, their presence is a boon to the people of the locality in general and faithful of the parish in particular.