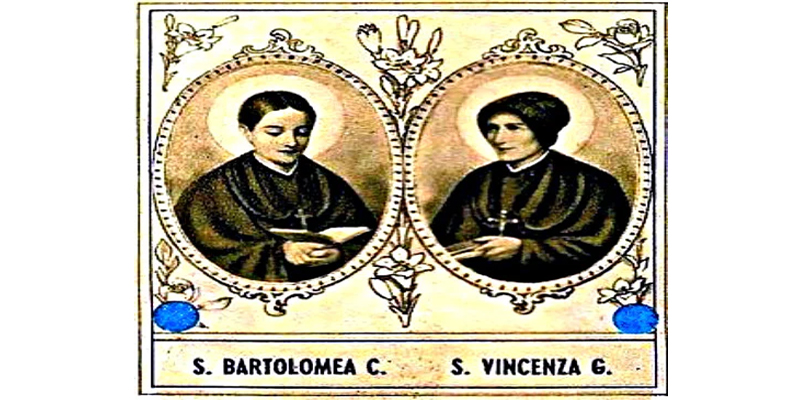 The Institute of the Sisters of Charity of Saints.Bartolomea Capitanio and Vincenza Gerosa(SCCG) also known as the Sisters of Maria Bambina had its origin in Lovere, Italy. It was founded by a young girl of 26 named Bartolomea Capitanio in 1832. Bartolomea’s inspiration to found an Institute took shape because of her deep love for God and through her involvement in the actual situation of the people of Lovere – her native town.

Having studied in the boarding school of the Poor Clares, she acquired a deep piety under the ever vigilant Mother Francesca Parpani. “I want to be a Saint, a great saint and a saint soon” were the words she uttered at the age of 7 at the ‘Game of Straws’. Her spiritual Director Don Angelo Bosio sensed the working of the Spirit in her and guided her in her spiritual Journey. He urged her to note down all the inspirations she received. This resulted in the inspired document we now call ‘the Foundation Document” which forms the basis of our present Rule of Life. She wrote: “The Institute which will be founded in Lovere is be totally founded on charity and this must be its principle aim…should have as its aim the education of poor young girls…devote itself to the relief of the sick..” In this way she outlined a MISSION which, though starting as a personal response to the needs of her environment was deeply rooted in charity and as such destined to be kept up and to spread beyond the bounds of Lovere.

Bartolomea was helped in her project by Catherine Gerosa, a simple, rich, charitable lady of Lovere. Together they consecrated themselves to God in a simple ceremony on 21 November 1832 at Casa Gaia. Thus began the Congregation of the Sisters of Charity. Bartolomea was called to her eternal reward on 26 July 1833 eight months after founding the Congregation. It was left to Catherine Gerosa, under the able guidance of Don Angelo Bosio to carry on the work begun.

The Institute spread rapidly in many Provinces of Italy. In 1860, Mother Theresa Bosio the first Superior General answered the call of the missions of India and sent four sisters to work in Bengal -India. Thus began the mission of the sisters in India.