SISTERS OF CHARITY OF ST.JOHN OF GOD (SCJG) 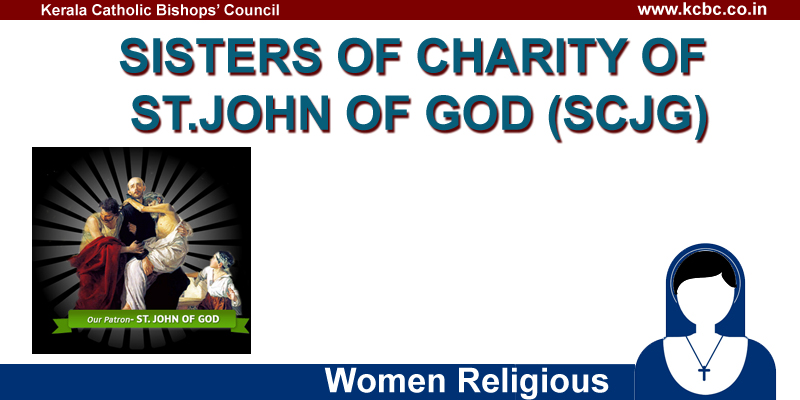 The congregation, which is at present diocesan, came to birth on 8th September 1977, in the Syro Malabar diocese of Kanjirappally, Kerala. It adopted the charism and spirituality of St.John of God who lived in 16th century in Granada, Spain. He is the founder and the heavenly patron of the Hospitaller order of Brothers of St.John of God spread over 50 countries of the world.

The servant of God Mar Mathew Kavukattu, the late Arch bishop of Changanassery, invited the Hospitaller Brothers of St.John of God, at the occasion of his hospitalization in their hospital in Germany in 1960s and requested their presence and service to the sick and needy of his Arch diocese in Kerala. Bro. Fortunatus Thanhaeuser OH of Rhein province, Frankfurt, responded to the Arch bishops invitation and in 1969 he laid the foundation of the Hospitaller order in India. In 1976 he started a home for the aged called Pratheeksha Bhavan  at Kattappana, Kerala. That facility also helped many orphans. He also built a hospital- St.John's - which was a landmark in the history of Idukki District and its development.

In 1976, the vocation promoter of the Hospitaller Brothers received totally unexpected and rather humorous letters from girls who wished to join the Order of Brothers. That was laughed away by all and was thought to be of no importance. Later another incident occurred. A young girl arrived accompanied by her mother and asked if she could join the Hospitaller order. Bro. Fortunatus started to think seriously about that. On the other side a need become evident in hospital for committed personnel to care for women. After prolonged and prayerful discernment, Bro. Fortunatus decided to respond by approaching Mar. Antony Padiyara, the then Arch. Bishop of Chanaganassery. The Arch. Bishop offered encouragement and guidance. In the year of the erection of the diocese of Kanjirappally, the first bishop Mar Joseph Powathil approved the plan of Br. Fortunatus to start a women religious institute following the spirit and charism of St.John of God. On 8th September 1977, the feast of the Nativity of the Blessed Virgin Mary, Bro. Fortunatus together with Bro Prakash Madappally OH, founded a new religious institute with 8 girls.

The Rhein, Bavaria and Austrian provinces of the Hospitaller order of brothers extended help and support to the growth and development of the new pious union. The Generalate of the Hospitaller order in Rome also contributed much to its growth. Bro. Alfons M. Hoering OH from Rhein province joined with Bro. Fortunatus for 17 years to deepen the members in the spirituality and charism of St.John of God. Sr.Borromeo FCC was entrusted with the task of religious formation of the members. She rendered very efficient leadership to the institute for 14 years (1977 - 1991). On 10th January 1984, seven of the founding members made their first profession of the evangelical counsels. Sr.Scholastica SH of Kanjirappally province served for 2 years as the superior of the institute. Many diocesan and religious priests and sisters rendered services to its mature growth. On 28th November 1992 seventeen members made their final profession and thereby the institute was abled to conduct its own general synaxis and to form a governing body. On 15th January 1994, with a decree, the Pontifical  Sacred Congregation for Oriental Churches approved the constitution of the institute and Mar Mathew Vattakuzhy, the second bishop of Kanjirappally, declared the elevation of the pious union of  St. John of God to the status of a diocesan congregation of the Syro Malabar Church. The Generalate house was also blessed on the same day. On 5th January 1997, Fr.Pascul Piles Ferrando, the then Prior General of the Hospitaller order, aggregated officially the congregation of sisters to the 500 years old tradition and spirituality of the Hospitaller Order of St.John of God.