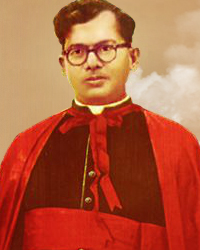 Monsignor Lawrence Puliyanath was born on 8th August 1898, to the couple of Maria and Peter, of the Puliyanath family, in Mundamveli. He had his primary education at St.Louis School, Mundamveli in western Cochin, and, his High School education was at St.Joseph’s High school, Thriuchirappily, TamilNadu.

His Seminary life commenced from Alappuzha Seminary and continued, at the Kandy Papal Seminary in Cylon (Sri Lanka) from where he attained doctorate in both Philosophy, and, Theology. He was ordained priest on 3rd October 1926. There upon, he began his apostolic Mission for the poor. His ardent love for mankind was touched by all the people, the rich, the poor, and, the nonbeliever.

His Holiness Pious the XIIth conferred on him “Domestic Prelete” on 7th March 1951. Thirty three years of his service was divided, as a professor of Philosophy in Alappuzha Seminary, as a Co-Vicar and later Forane Vicar in the parish of St. Lawrence Church, South Edakochi. Thus he served the society at large.

Steps were taken in Rome, to promote him, as the first local Bishop in the Diocese of Cochin. But he reclined such a high title and remained humble and simple. By this deed he showed mankind that he was deeply human and yet deeply attached to God. His strong and great belief in God was, a source of inspiration and that made him to take the right decisions at the difficult time too. Bishops, priests, the down-trodden, and the ordinary too, came to him, seeking advice and help.

He was sick, and suffered great pain without minimum hesitation and offered it to God, for the poor. This great saintly soul left for his heavenly abode to his “Great love”, Jesus, on 20th of February 1961. To the tomb, where his mortal remains in Edakochi, St. Lawrence, thousands of people from all spheres of life reach, to pay homage and receive blessings, which are beyond human attainments.

Today, Edakochi St. Lawrence parish has been transformed into a “Pilgrim Center”. As homage to this living example, thousands of candles are being burned, near his tomb, every hour of the day and night, and, we do receive innumerable requests and thanks-giving daily in His name.