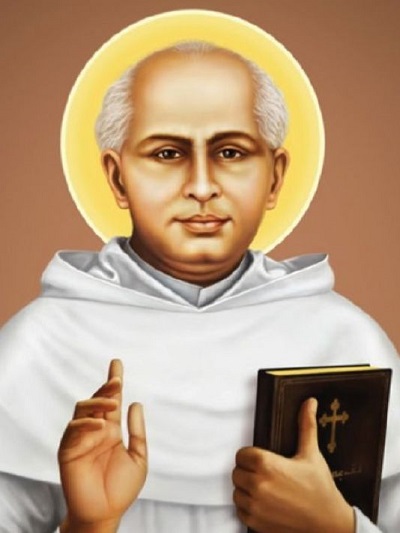 Saint Kuriakose Elias Chavara was born on 10th Feb. 1805 of God fearing parents Iko (Kuriakose) Chavara and Mariam Thoppil of the Syro-Malabar Church, at Kainakary, near Allappuzha, Kerala. According to the local custom the infant was baptized on the 8th day in Chennankari Parish Church, Alappuzha.

From the age 5 to 10, he attended the village school (Kalari) to study languages, different dialects, and elementary sciences under the guidance of a Hindu teacher (Asan). Inspired by the desire to become a priest, he began studies under the parish priest of the church of St. Joseph. At the age of 13 in 1818 he entered the seminary at Pallipuram where Malpan Thomas Palackal was the Rector. He was ordained priest on 29th November, 1829 at Arthunkal and celebrated his First Holy Mass at Chennankari Church. After the ordination he was engaged for some time in pastoral ministry; however he soon returned to the seminary to teach and also to officiate for Malpan Thomas Palackal during his absence. Thus he joined Malpan Thomas Porukara and Malpan Thomas Palackal when they were planning to found a congregation.

In 1830 he went to Mannanam to direct the construction of the first house of the congregation of which the foundation stone was laid on 11th May, 1831. After the death of both the Malpans, Saint Kuriakose Elias Chavara took up leadership. On 8th December, 1855 he made the religious profession along with other 10 companions, under the name “Kuriakose Elias of Holy Family”.

He was the Prior General of all the monasteries of the congregation from 1856 till his death in 1871. When, in 1861, a schism threatened the Church of Kerala with the arrival of Mar Thomas Rokos without proper credentials from the Pope, Saint Kuriakose Elias Chavara was appointed the Vicar-General of the Syro-Malabar Church by the Arch-Bishop of Verapolly. Saint Kuriakose Elias Chavara is gratefully remembered and acknowledged by the later leaders of the Church and by the Catholic community in general for his strenuous fight, strong stance , and effective leadership in thwarting `Thomas Rochos’ intrusion and saving the church of Kerala from schism.

Saint Kuriakose Elias Chavara, one of the founding fathers and the first Superior General of CMI (Carmelites of Mary Immaculate) congregation of the Catholic Church, died on January 3rd, 1871 in the odour of sanctity leaving behind him the high reputation of a very holy monk. He was declared blessed on February 8, 1986 by His Holiness Pope John Paul II.

His mortal remains, transferred from Koonammavu where he died, were piously kept in the chapel of St. Joseph’s Monastery, Mannanam, Kerala, India. Because of his sanctity and his showering of blessings upon those who seek the intercession of him, Mannanam has become a pilgrim centre. Thousands of people come to the tomb of Saint Kuriakose Elias Chavara on every Saturday for the Holy Mass and Novena. The feast of Saint Kuriakose Elias Chavara is celebrated with great devotion and solemnity every year from December 26th to January 3rd.

Besides the first house at Mannanam, he started several religious houses in different parts of Kerala. Starting of seminaries for the education and formation of clergy, introduction of annual retreats for priests and people, starting of forty-hour adoration, a house for the dying and destitute, special attention to catechumens, schools for general education were among the few of the various activities under Saint Kuriakose Elias Chavara’s leadership.

Besides, in 1866 with the co-operation of Fr. Leopold Beccaro OCD, Saint Kuriakose Elias Chavara started the Congregation of the Mother of Carmel (CMC) for women. He was the pioneer of popular education in Kerala and the one who inspired the Catholics to start schools in every parish along with their churches. That is why in Kerala schools are popularly called “Pallikkoodam” – a place for education attached to the church.Amidst his diverse and manifold activities, he found time and leisure to write a few books, both prose and verse, for the benefit of the faithful. His counsels to the Christian families given in the form of a “Testament of a Loving Father” are universally applicable and are relevant to this day. Essentially a man of prayer and intense charity, he stayed in close communion with the Lord, amidst his several religious and social activities, permeating his spirituality to all around him, so much so that he was accepted and referred to as a man of God, from his early years.