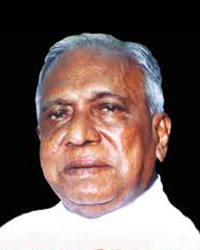 Monsignor Reynolds Purackal was a priestly priest who radiated Christ in every action of his. As bishop Fernandes of Quilon remarked in the funeral eulogy;"Monsignor Reynolds who in his life time was thought by many as a saint even more powerfull".
The entire fifty golden years of his priesthood have been spent within the four walls of St.Antony's Orphanage Alappuzha, which during the last half a century grew up from a tiny little shelter for twenty or so orphans into gigantic structure incorporating an orphanage, a printing press, an I.T.C., a workshop and carpentry,blossoming the lives of hundreds of boys who today occupy places of importance in the five continents of the world, beginning with highest Indian lay official in the Vatican to officers with the embassies and consulates in the cities around the globe, counting among them a bishop and about fifty priests.