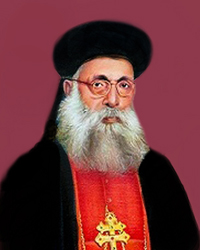 Geevarghese was born on 21 September 1882 at Puthiyakavu in Mavelikara as the son of Thoma Panicker and Annamma of Panikeruveedu.  After his training in Kalari (Elementary School), he joined the CMS English School nearby and later continued his studies in a Government Public School. The Jacobite Metropolitan, Pulikottu Mar Divannasios, who was edified by the pious, intelligent and brave child Geevarghese, took him to the Seminary in Kottayam for higher studies and for priestly formation. He completed matriculation from MD Seminary High School in flying colours.  Later, he passed the Fellow of Arts (FA) exam from CMS College, Kottayam.  He secured his BA and MA Degrees in History and Economics respectively from Madras Christian College. On 26 Dhanu 1074 (Malayalam Era) Pulikottu Mar Divannasios ordained him a Deacon, in the church at Puthenkavu. As a Deacon, he spent his days preaching on the Sacraments to revivify the Malankara Church, weakened by strife and litigations. Thus he came to be named K?dasa Semmasan (Deacon of Sacraments).

Deacon P.T Geevarghese was appointed Principal of the reknowned MD Seminary High School, in 1908. He was ordained priest by Vattaseril Mar Divannasios at Parumala Seminary on 15 August 1908. He became famous as MA Achen, as he was the first MA Degree holder among the Syrian priests of Kerala.

Fr. P.T. Geevarghese served as professor of History, Politics and Economics from 1913 to 1919 in the University of Serampoor, Bengal.  It was during this period that he got inspired by the Indian culture and Sanay?sa and started a new religious movement (Sanay?sa Prasth?nam), in collaboration with the students, whom MA Achan brought from Kerala to Serampoor to pursue higher education. He intended to found an Ashram in an isolated place and wanted to engage himself in activities of love of God, spiritual awakening of the Malankara Church and the upliftment of the downtrodden of the society.  Eventually, he resigned his post at the University and founded the Order of the Imitation of Christ, also known as Bethany Ashram, on 15 August 1919 at Mundanmala in Ranni-Perunadu.    He was made Remban on 28 January 1925 at Tirumoolapuram Church and on 1 May he was ordained Bishop at Niranam after the name Mar Ivanios.  He founded a religious congregation for women known as the Sisters of the Imitation of Christ, also known as Bethany Madhom, on 8 September 1925 after he was ordained Bishop of Bethany. On 13 February 1929 he was raised as the Bethany Metropolitan.
Metropolitan Mar Ivanios had dedicated his life to revive the Malankara Church weakened by disputes and litigations. It was under this circumstance that MA Achen, who was just 30 years old succeeded to get established the throne of the Catholicos in Malankara in the year 1912.

At a time when the Metrankakshi (Bishop’s Party) and the Bavakakshi (Catholicos’ Party) were engaged in court litigations to secure the title-hold of Vattippanam (a fixed bank deposit) for favour of the Malankara Church, he toiled to bring peace and reconciliation in the Church. The Synod of the Orthodox Church, convoked at Parumala in 1926 as a solution to find lasting peace in the Church proposed the reunion of the Malankara Church with the Catholic Church and authorized Mar Ivanios to hold negotiations with Rome for the same. After a persevering endevour for four years, Rome accepted the proposal of Mar Ivanios for reunion. However, as the verdict of the civil court on Vattippanam came in favour of the Metrankakshi, they backed out of re-union endevours.  But Metropolitan Mar Ivanios along with Mar Theophilos, Fr. John OIC, Deacon Seraphion and Mr. Kilileth Chacko came in communion with the Catholic Church, making the profession of faith before Bishop Aloysius Maria Benzigor in the Aramana Chapel at Kollam on 20 September 1930.

Archbishop Mar Ivanios made a global influence through his ascetic life and endevours for the communion of Churches through the Re-union Movement which was essentially ecumenical in nature. He was a great force in the society through his pioneering efforts in the fields of education and dedication to the cause of the poor. Within twenty two years of his life as Metropolitan Archbishop of Trivandrum, he founded 78 primary schools 18 Upper Primary Schools, 15 High Schools, 2 Teacher Training Schools and 1 Arts college.

As his health deteriorated, he received the anointing of the sick for prelates (Kanthila Susrusha). He ordained Benedict Mar Gregorios as Auxiliary Bishop of Trivandrum.  He passed away to his eternal reward on 15 July 1953.
Ever since his demise, pilgrims flock to his tomb at St. Mary’s Cathedral, Pattom, Trivndrum. Thousands join the Annual Padayatra (pilgrimage on foot) to his tomb from 10 – 15 July every year to celebrate his commemoration. He was declared servant of God in the Church on 14 July 2007 by His Beatitude Moran Mor Baselios Cleemis Catholicos, the Major Archbishop of the Malankara Catholic Church.