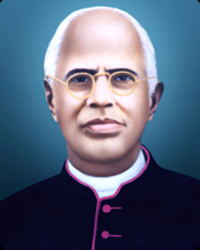 The Founder was a highly qualified person with a divine vision, the vision of the great prophet Isaiah. "The spirit of the Lord is upon me, because he has anointed me to preach good news to the poor. He has sent me to proclaim release to the captives and recovering of sight to the blind, to set at liberty those who are oppressed to proclaim the acceptable year of the Lord". (Lk. 4:18)

Msgr. Joseph C. Panjikaran was born on 10 September 1888 in the village of Uzhuva near Cherthala town, Kerala, India as the second child of late Mr. Chacko Panjikaran and Mariam Kanichattu. Joseph was called by his pet name Outhachan. Young Joseph, being a born leader, completed his matriculation in 1906.

He got graduated in History from St. Joseph College run by Jesuits at Thiruchinappilly. History was his favorite subject and came out victorious in 1913 to be acclaimed as the first Postgraduate among St. Thomas Christians in Karala.

It is quite rare that students who graduate with flying colours in their M.A. take up the vocation of priesthood. But he preferred to dedicate his life to the Lord. In May 1913, the same month he got his M.A. degree, he joined the minor seminary at Ernakulum. He was then sent to the prestigious papal seminary at Kandy in Sri Lanka for his clerical studies and training. After completing the theological studies, he was ordained priest in the seminary at Kandy on 21st December 1918. On the following day he celebrated his first Holy Eucharist. Kerala Catholic Church was proud to have a priest with a Master’s Degree. Fr. Joseph returned to Kerala as a scholar in sacred sciences, who possessed artistic talents, leadership qualities, eloquence in preaching, selflessness in service and virtue in universal love and goodwil.

The Charism and the Spirit of our founder

Love of God is the supreme gift of all other gifts. It is a personal divine experience. Our revered founder contemplated Christ, the reflection of God’s love and mercy in the deep silence of his heart and received with humility the merciful love of the father in his pure heart. He desired the intensely to share this merciful love with the least of the brethren. In the course of time he realized that the healing ministry is the best means of sharing the compassionate love of Christ.  To translate his vision into a reality, he drew spiritual power and strength from the words of Jesus. “as long as you did it to the least of my brethren, you did it to me” (Mt. 25:40). An inner call, which was totally evangelical and divinely inspired, compelled him to serve the poor, the sick and the least with the merciful love of Christ. Our Congregation is the response of our beloved founder to his inner call. The glorious gift of bringing the poor, the sick and the least of the brethren to salvation and an experience of the Kingdom of God through healing ministry is the charism that we received from the founder.

It was the zeal of our founder for the salvation of souls that inspired him to choose healing ministry as the apostolic mission of the congregation. The word of Jesus on the cross, “I thirst”, aroused in him a thirst for souls. He went down to the sick with the maxim, “through the body to the soul”. The words ‘this is a matter of souls’ always rested upon his lips. It was because of his zeal for souls that he instructed the first members that while nursing the sick they should also take care of their souls. Perfect surrendering to the will of God, respect and obedience towards authorities and humility were shining virtues that we could  find in him. The motto of his life was ‘thy will be done’. He surrendered himself to the will of God till the last moment of his life.

The life of our founder was a constant movement towards the love of God. From the very childhood, he used to pray before the crucified Christ for a long time and experienced the merciful love of Christ that gushed forth from the cross. He listened to the voice of the Holy Spirit in prayer and surrendered to the promptings of the Spirit with humility. He meditated upon the word of God  every day and grew up steadily in the experience of God. He spent sufficiently long hours before the Blessed Sacrament and filled his heart with the merciful love of Christ, the divine healer. He had a strong faith in the providence of God, which strengthened him to be firm in the face of difficulties. His devotion to the Sacred Heart of Jesus, the3 ocean of love filled his heart with compassionate love and he learned the meekness and the humility of the Heart of Jesus. He had a filial devotion to Mary our Blessed Mother. He accepted her as his counsellor in times of difficulties. The love and piety he showed towards St. Joseph, his heavenly patron, generated a deep faith in the intercessory power of St. Joseph, which enabled him to say even at the last moment of his life, that “St. Joseph will take care of you”. His spirituality, which was made mature through asceticism and self - denial because more luminous with purity of heart, sincerity and humility. He always experienced the presence of God within him. It enabled him to see Christ in every person he met, especially the poor, the sick and the least of the brethren. He taught us to see Christ in the sick and minister to them as we minister to Christ. Our first members imbibed the spiritual treasures of our founder and handed it over to generations.

Spiritual Legacy He Left Behind